As part of the exhibition series "Art for Impact", the Intalcon Foundation is showing photographs by Markus Mauthe.

Markus Mauthe is not only a photographer, but also an environmental activist. He is committed to preserving our habitats and protecting the ecological diversity of our planet. The adventurer prefers to travel where nature still functions untouched in its intact ecosystems.
For his project "At the edges of the world", he went in search of the last indigenous peoples. Far away from civilisation, they live in harmony with nature without destroying it. Centuries-old knowledge helps them to do so.
However, their traditional ways of life are increasingly influenced by globalisation. Their habitats are being destroyed and their existence threatened. Due to their close connection to nature, indigenous peoples are of great importance for the preservation of biodiversity and thus also for climate protection. Together with Markus Mauthe, it is close to the heart of the Intalcon Foundation to stand up for indigenous peoples and to draw attention to their importance for our life on earth.

THe IMPORTANCE OF INDIGENOUS PEOPLES

According to the United Nations, 370 to 500million people belong to approximately 5,000 different indigenous groups in the world. They represent a large part of the cultural diversity. They usually have a spiritual connection to nature and all life on our earth. Their extensive knowledge of nature and the plant world supports, for example, the production of medicine and is therefore particularly valuable for all people in the world.
‍
Indigenous peoples live on or manage only about 25% of the earth's surface, but 80% of the world's biodiversity is found in their largely untouched habitats. Why is this so? Because they do not exploit nature, but sustainably manage the land on which they live. Here is an example:

The indigenous peoples in the Amazon are the guardians of the forest. Their way of cultivating crops, for example, helps to increase natural diversity. Scientific results show that more plants as well as more plant species grow in the vicinity of their settlements than in the uninhabited parts. The Aluku of French Guyana, for example, distinguish 90 varieties of cassava and their neighbours, the Wayana, cultivate 28 species and 129 varieties. This diversity - instead of monoculture - helps to protect our life.

So far, only about 35% of indigenous peoples' habitats are protected. However, indigenous peoples can play a key role in achieving the Convention on Biological Diversity's (CBD) goal of protecting more of the Earth's surface (see also "Global Biodiversity Framework" under "Further Knowledge" at the bottom).

In the globalised world, the influence of civilisation unfortunately also reaches into the last corner of the earth, so that all indigenous peoples now suffer from similar problems.
‍
Primarily due to economic interests, such as deforestation for agriculture or the extraction of raw materials, they are driven out of their habitats. They are exposed to discrimination, violence, and other human rights violations.

Due to their remoteness and consequently poorer access to medical care and basic foodstuffs, indigenous people are also strongly affected by the consequences of the pandemic. However, by preserving natural habitats and protecting territories, they can play an important role in preventing future pandemics.

In order to achieve the goals of biodiversity and climate protection, indigenous peoples must be respected, their habitats protected, and their wisdom preserved. Their values and beliefs must not be lost to secure life on our planet for future generations.

In South Sudan, between the White Nile and the southeastern border area with Ethiopia, Kenya and Uganda, live the Mundari, the Jiye and the Suri. The landscape there is barren. Provided enough rain falls, it yields no more than fodder grass for the cattle herd and some cereals such as sorghum.

Herds of cattle provide food and guarantee economic independence. And because people are mobile and frugal, it is traditionally not the possession of land but its temporary accessibility that is decisive. It is not the land that makes people rich, but the cattle. 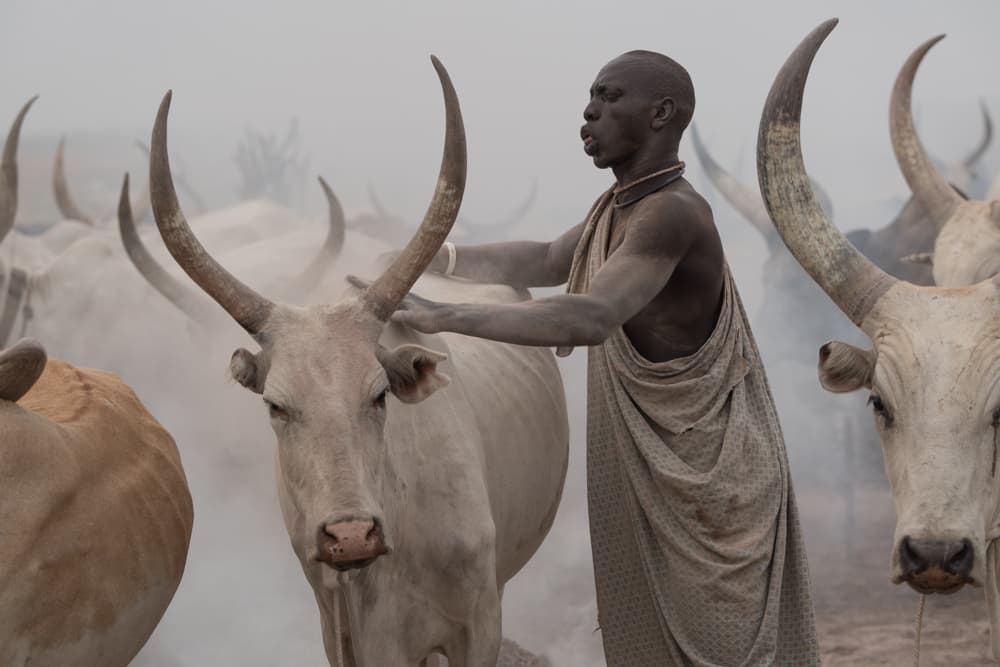 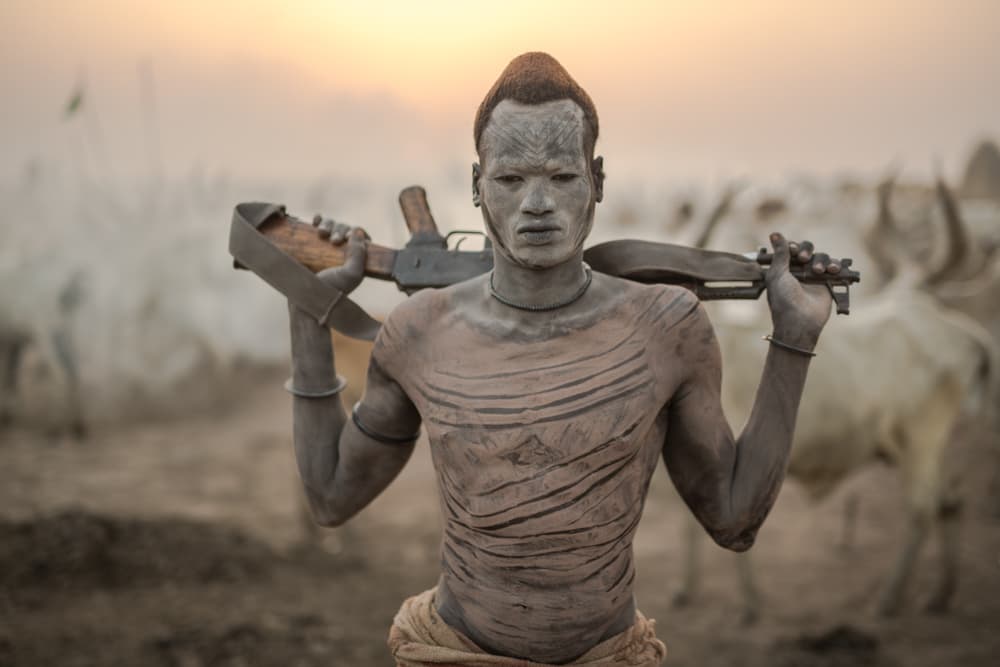 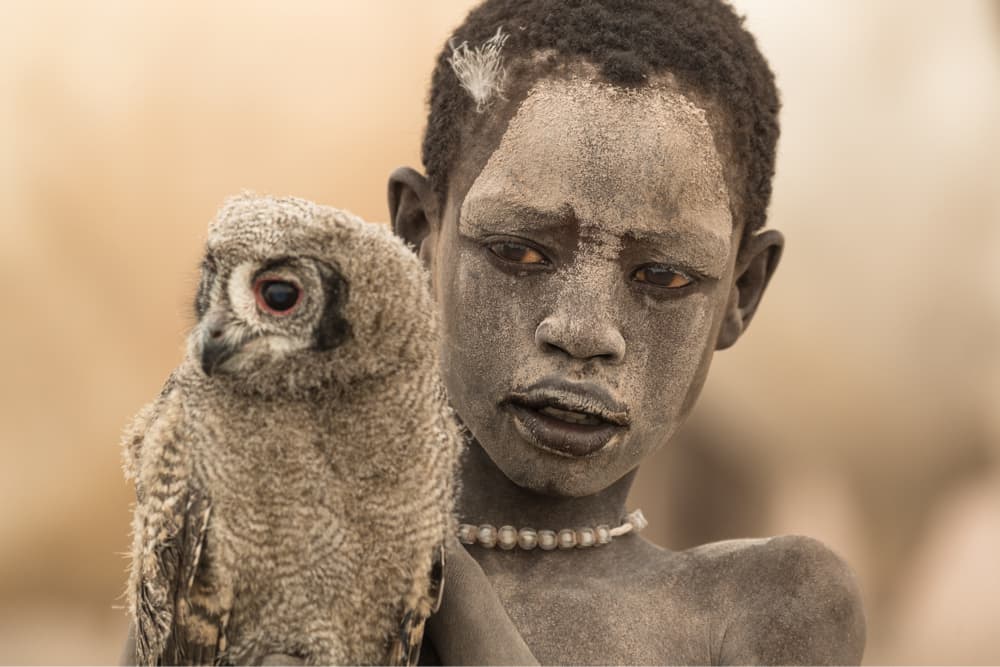 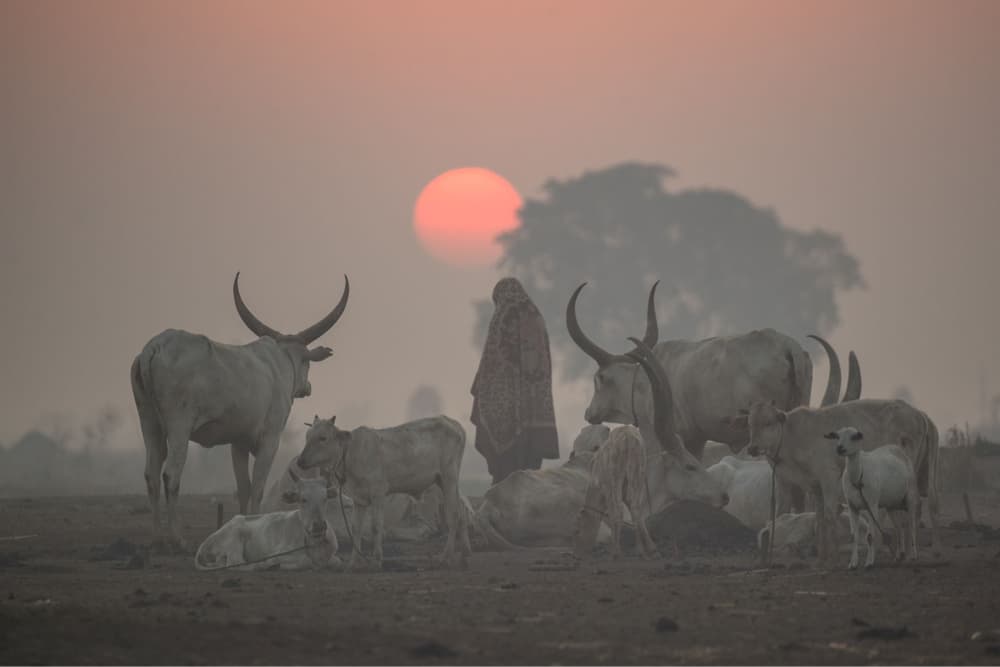 Indigenous ethnic groups such as the Padaung, the Kaywe and the Chin live in partly mountainous regions that are difficult to access. The remaining small part of the Ruhingya religious minority also lives here. Around the Inle Lake the group of the Intha settles.

Indigenous ethnic groups such as the Padaung, the Kaywe and the Chin live in partly mountainous regions that are difficult to access. Around Inle Lake, the Intha group settles. Rice cultivation and fishing are the main sources of income. During the British colonial period, the various minorities were disadvantaged. This discrimination has not changed during the various, often brutal military regimes, nor in today's at least formally democratic state. The Muslim Rohingya in particular suffer from this. They are even denied citizenship. Many live in forced exile in Bangladesh. 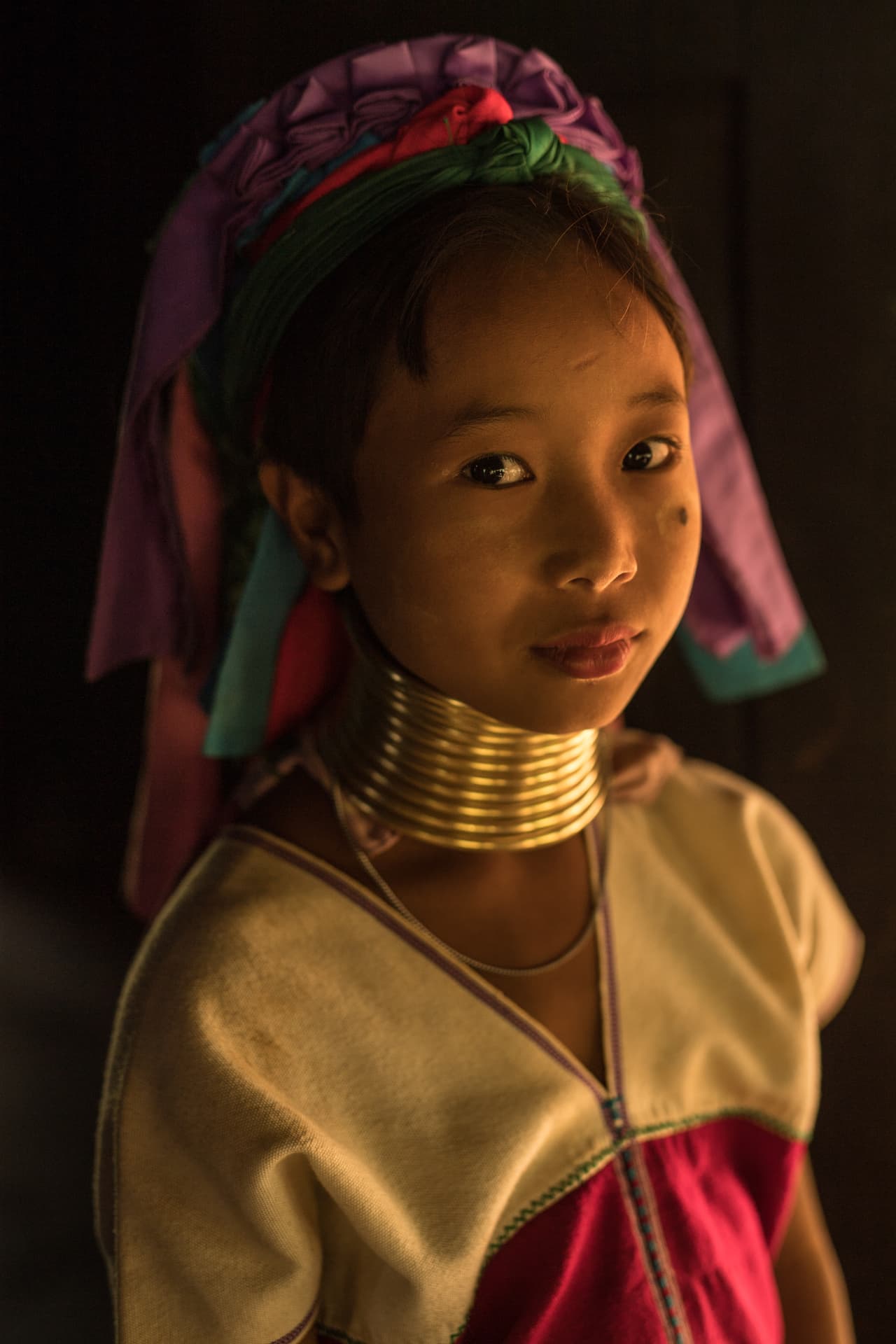 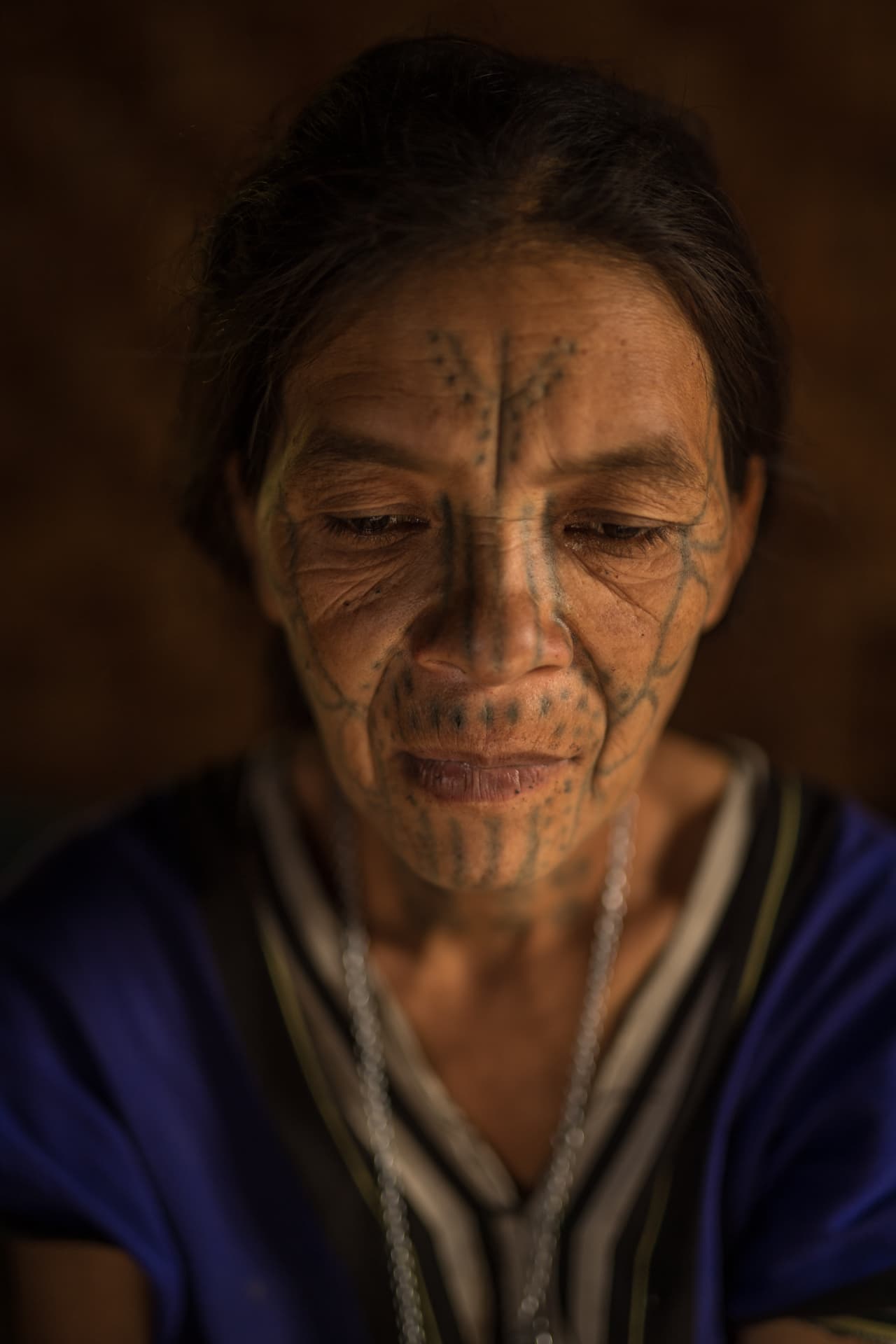 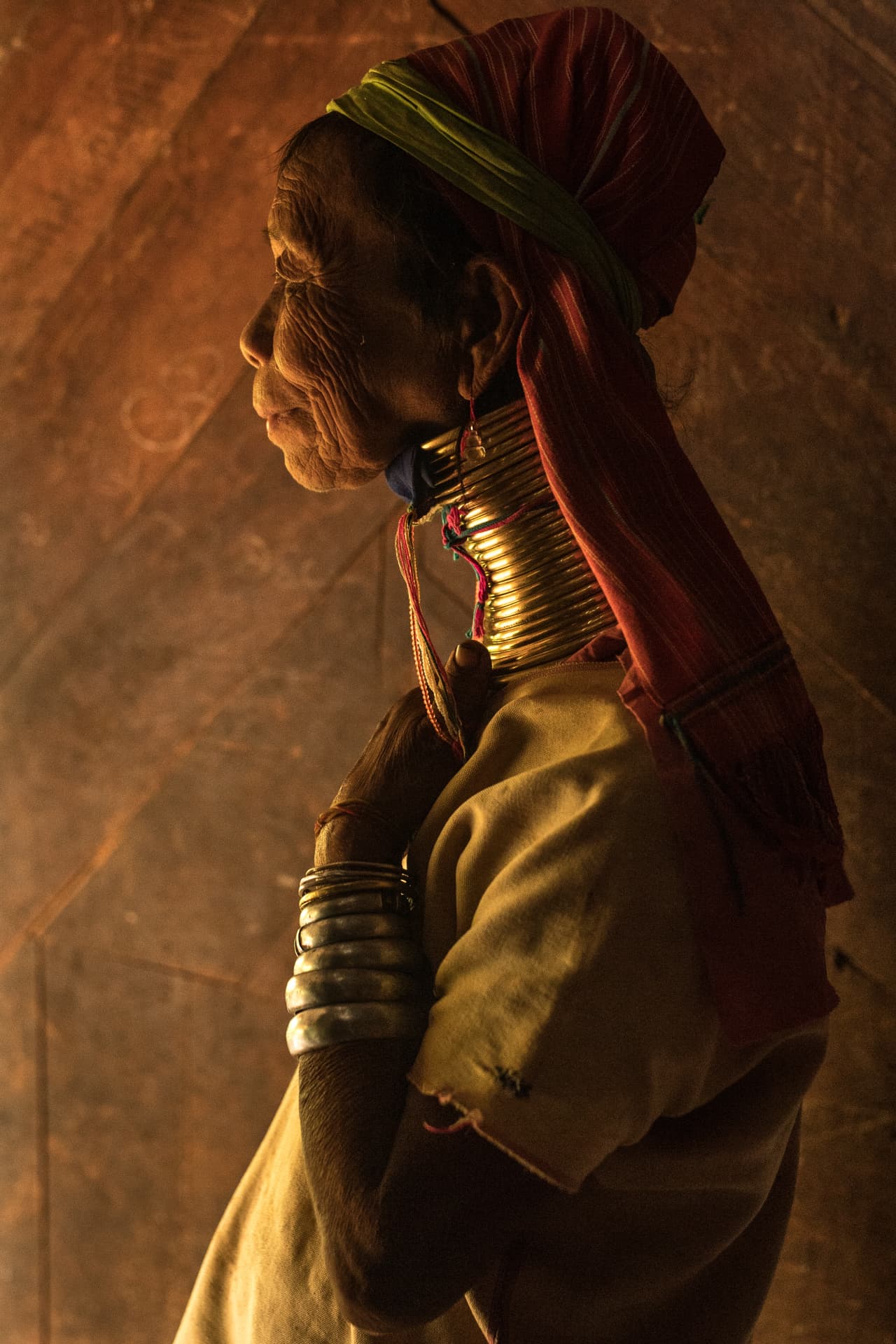 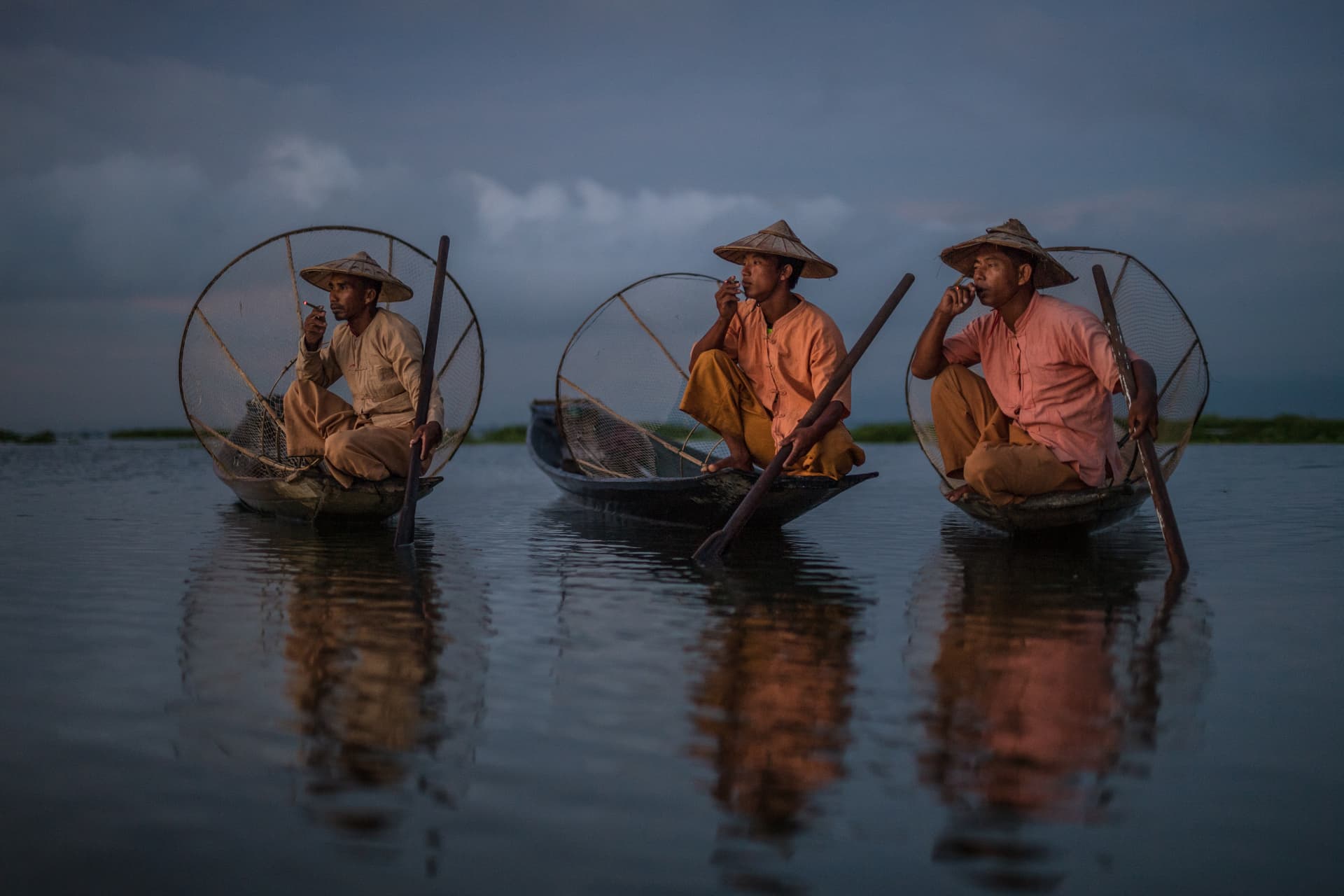 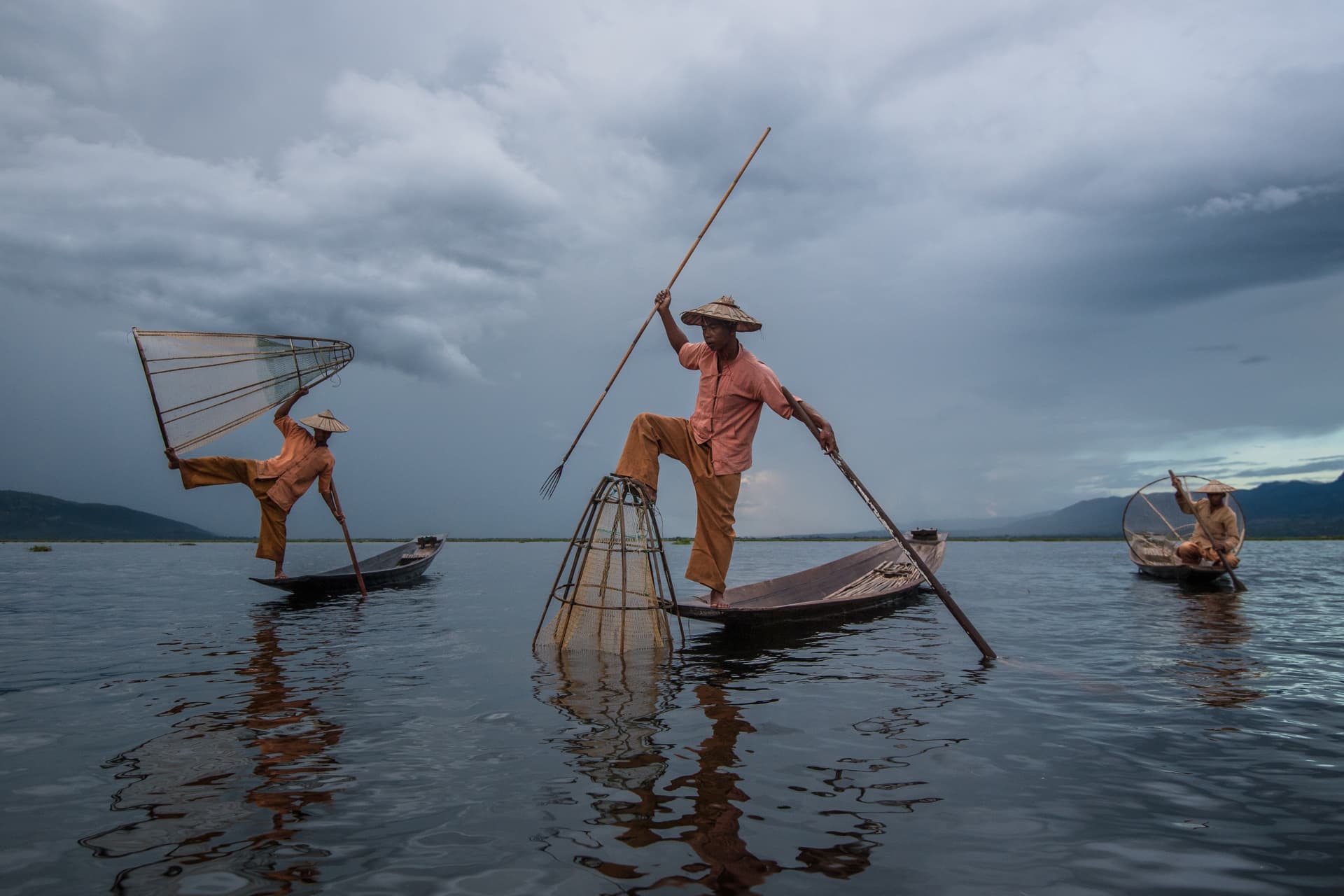 In the Amazon in Brazil, in the Xingo Basin, the Mehinaku have lived from fishing for centuries. Markus Mauthe photographed them in the morning mist. Backlit by the sun, a hunter in a stale canoe keeps his balance standing with his bow and arrow. His children no longer have this ability to catch fish like this. Habits and dexterity at work are being lost and increasingly overlaid by the modern, western-global lifestyle.

Politicians in the country see the rainforest primarily for its economic potential and not as a habitat and cultural area worthy of protection. And because the sale of agricultural products - above all soy - promises great turnover, there is no quick solution for an end to the irrevocable destruction of unique habitat and its utilization for the modern (agricultural) economy. 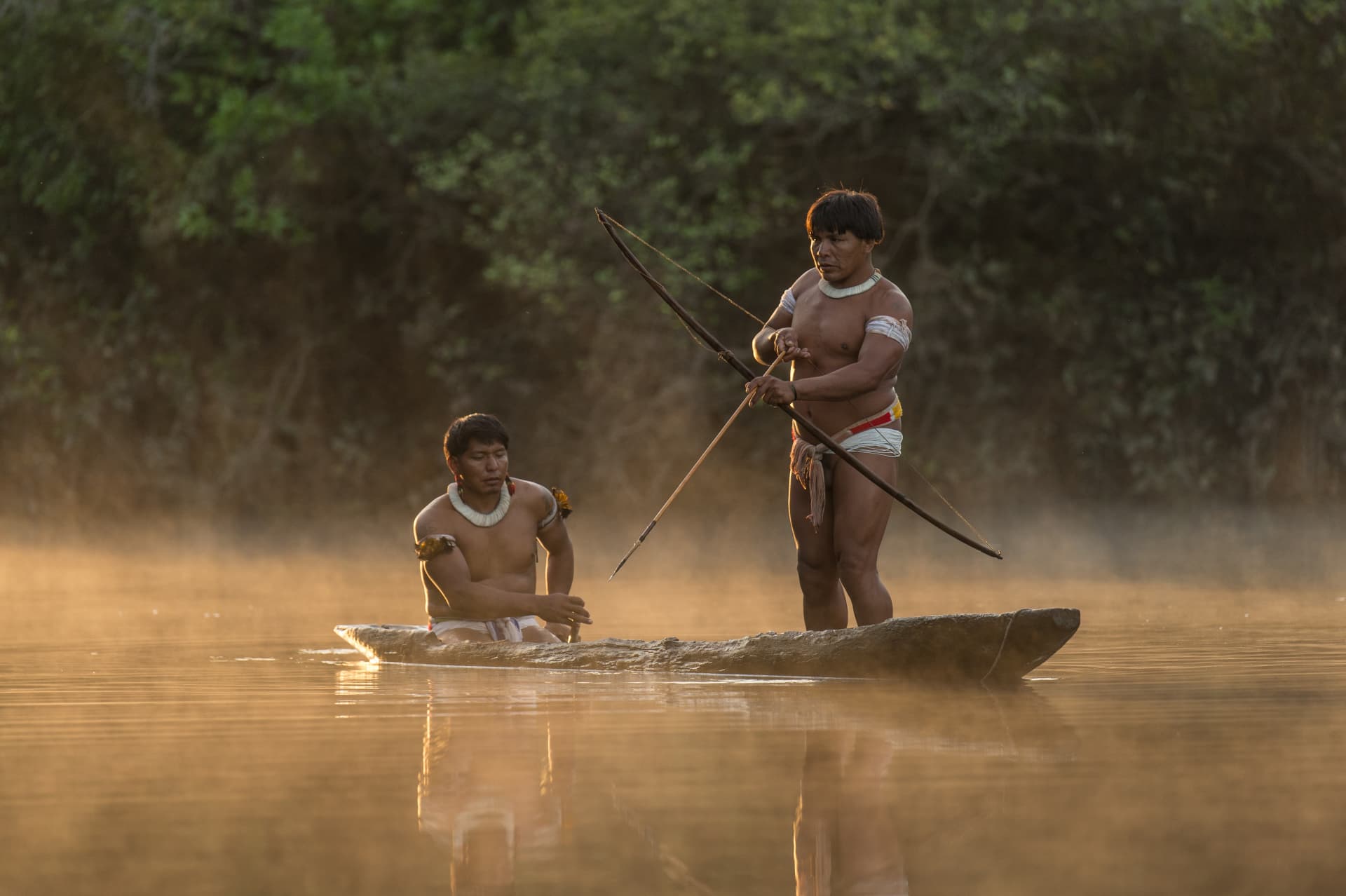 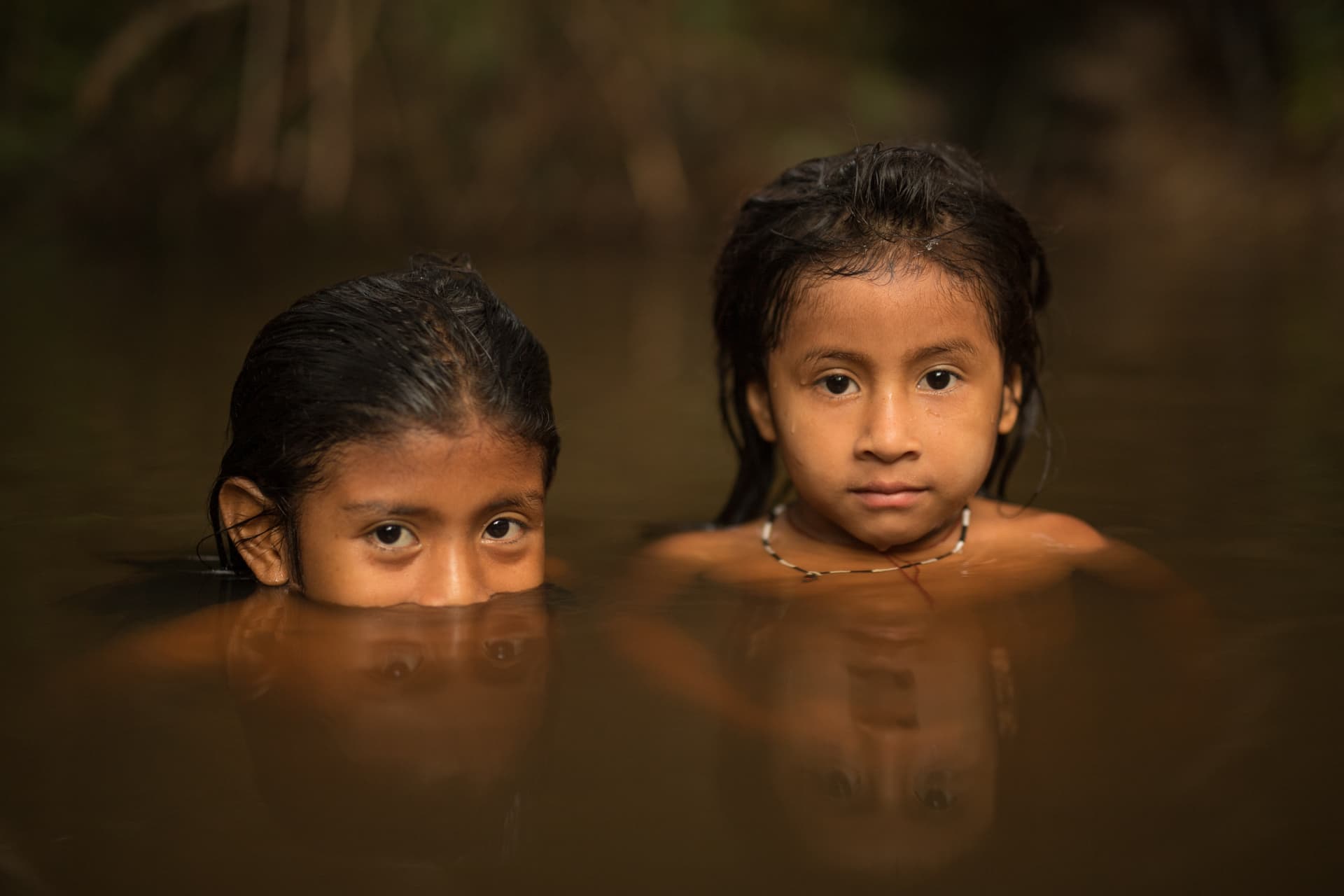 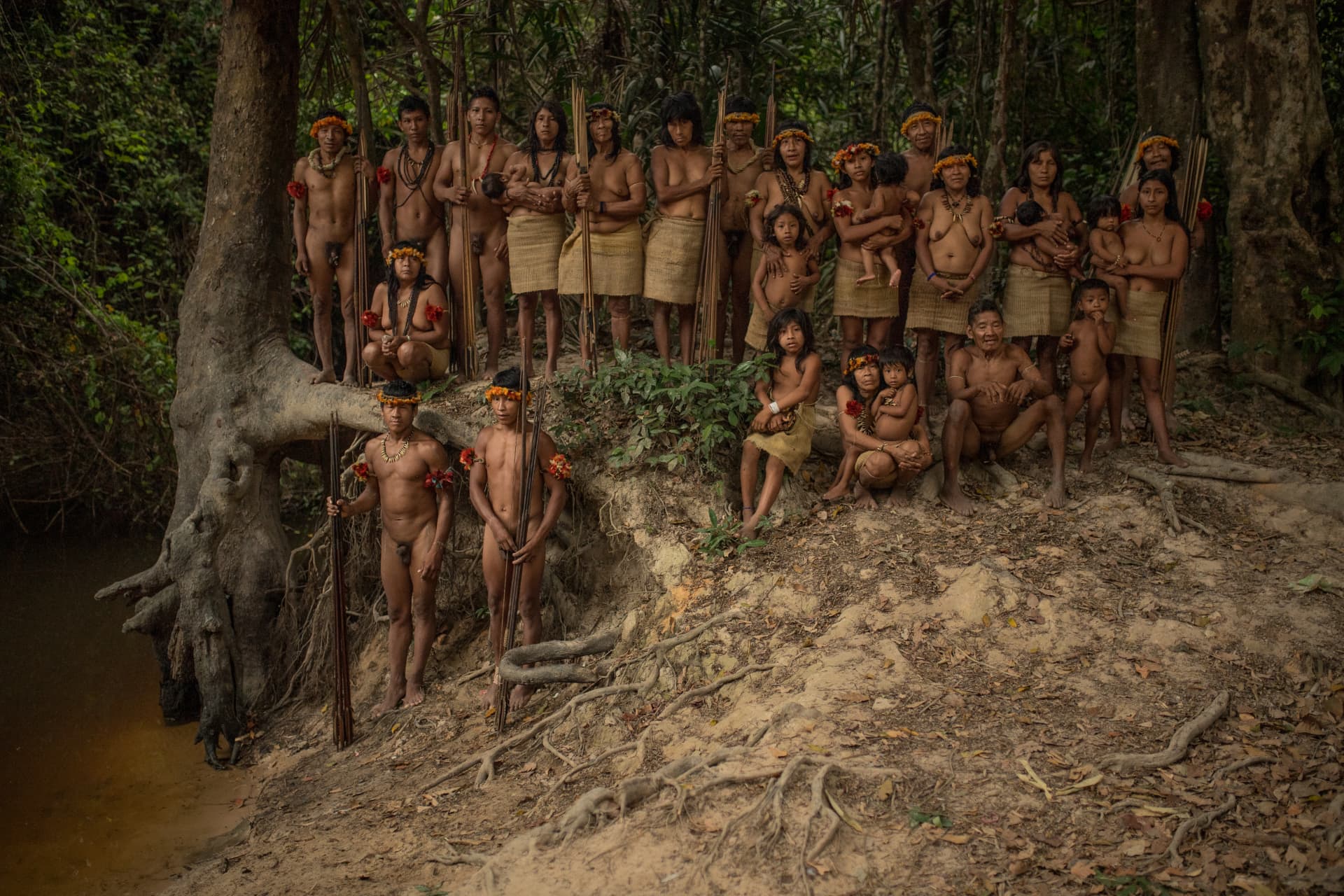 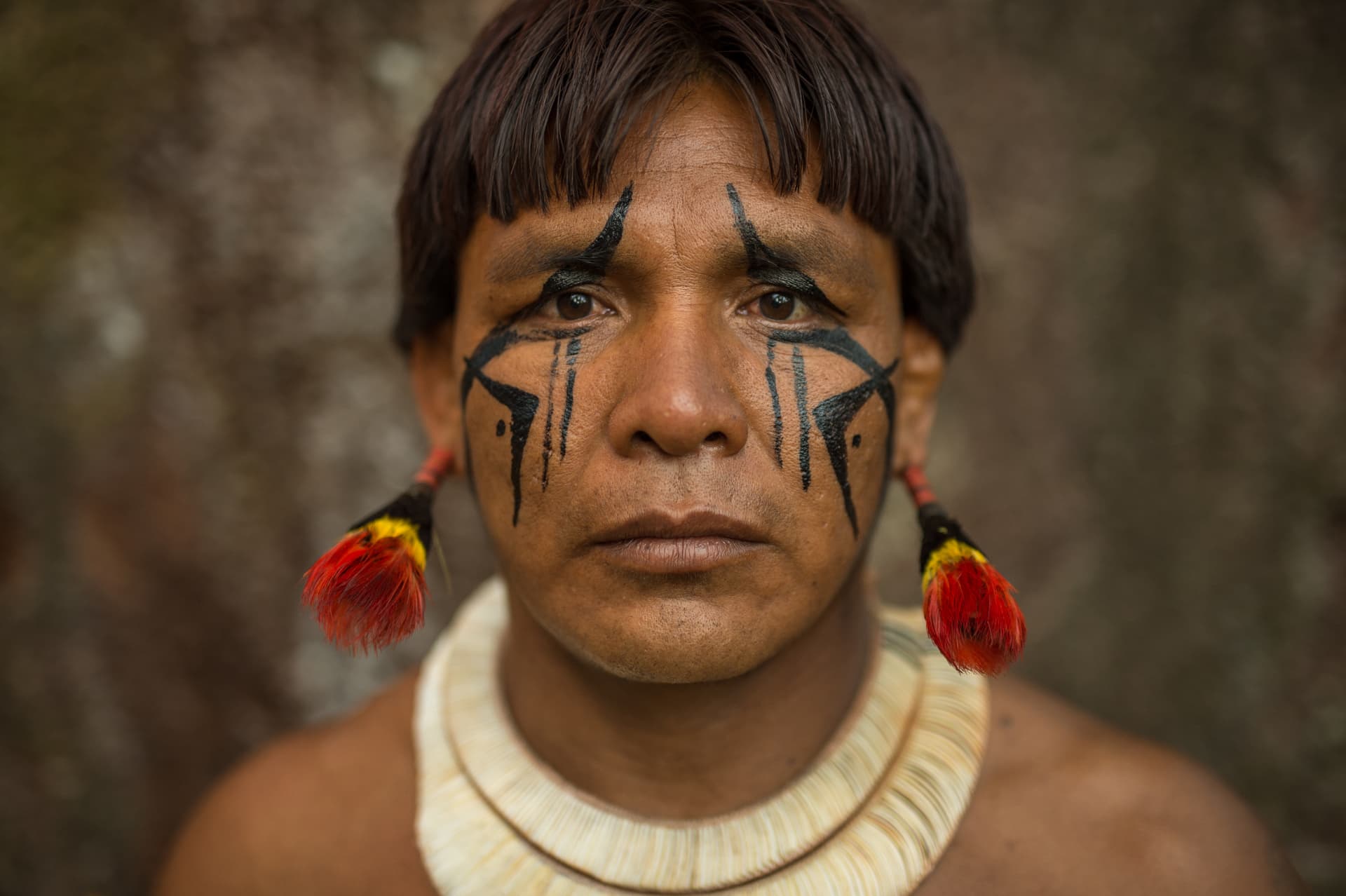 The San are among the first human inhabitants of southern Africa. Since colonial times, the arable land in Namibia has been predominantly in the hands of white settlers. Land around which a fence has been drawn and is alien to a semi-nomadic people like the San or the Himba. Their herds of cows and goats always have to move and so find food on the few remaining open spaces.

Contact with the "outside world" comes mainly through tourists. The barely veiled skin as well as the hairstyle, which is embalmed with a paste of butterfat and grated, ocher-colored stones to protect it from the sun, together with the elaborate jewelry, exerts a great fascination on them. 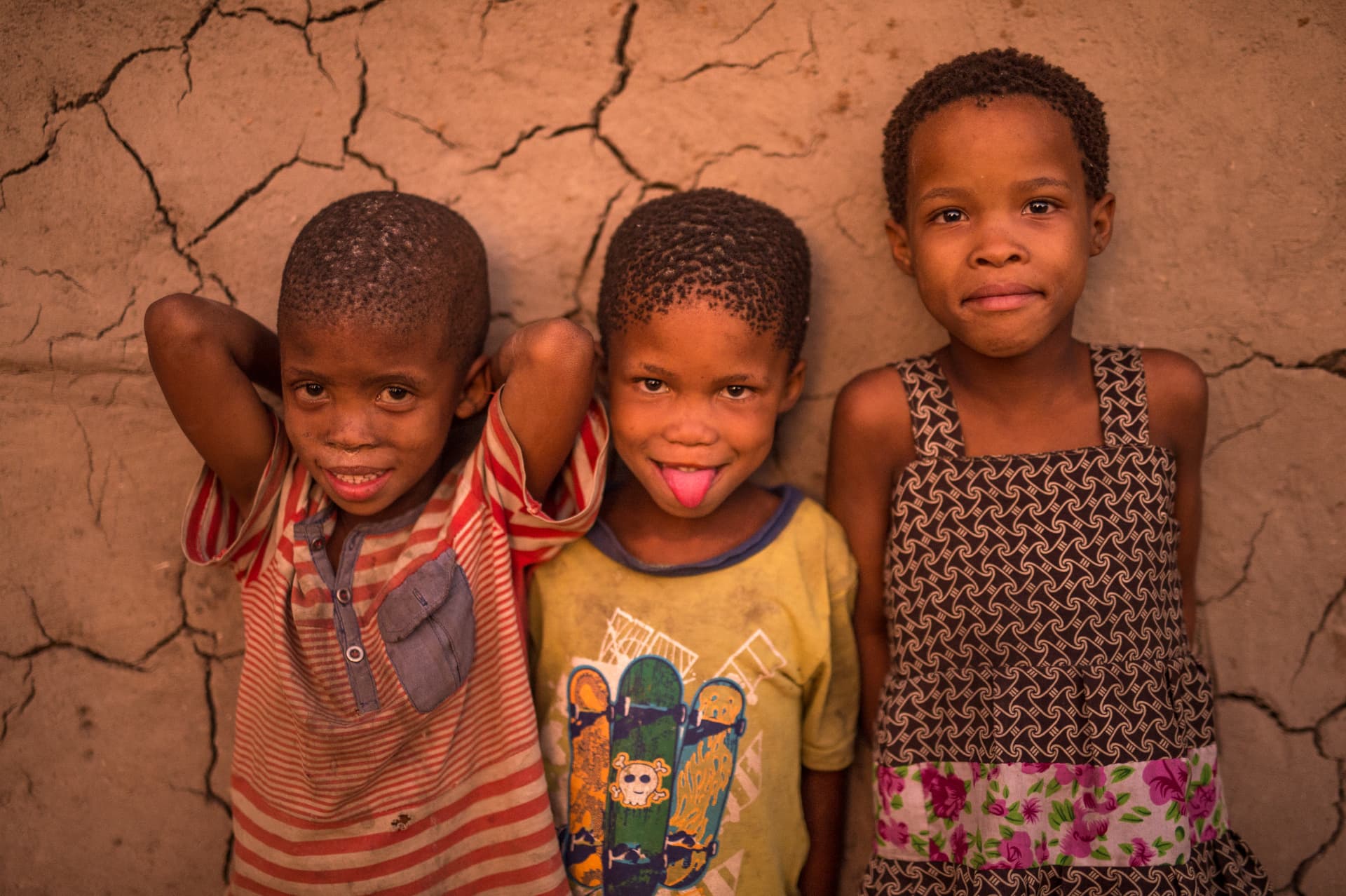 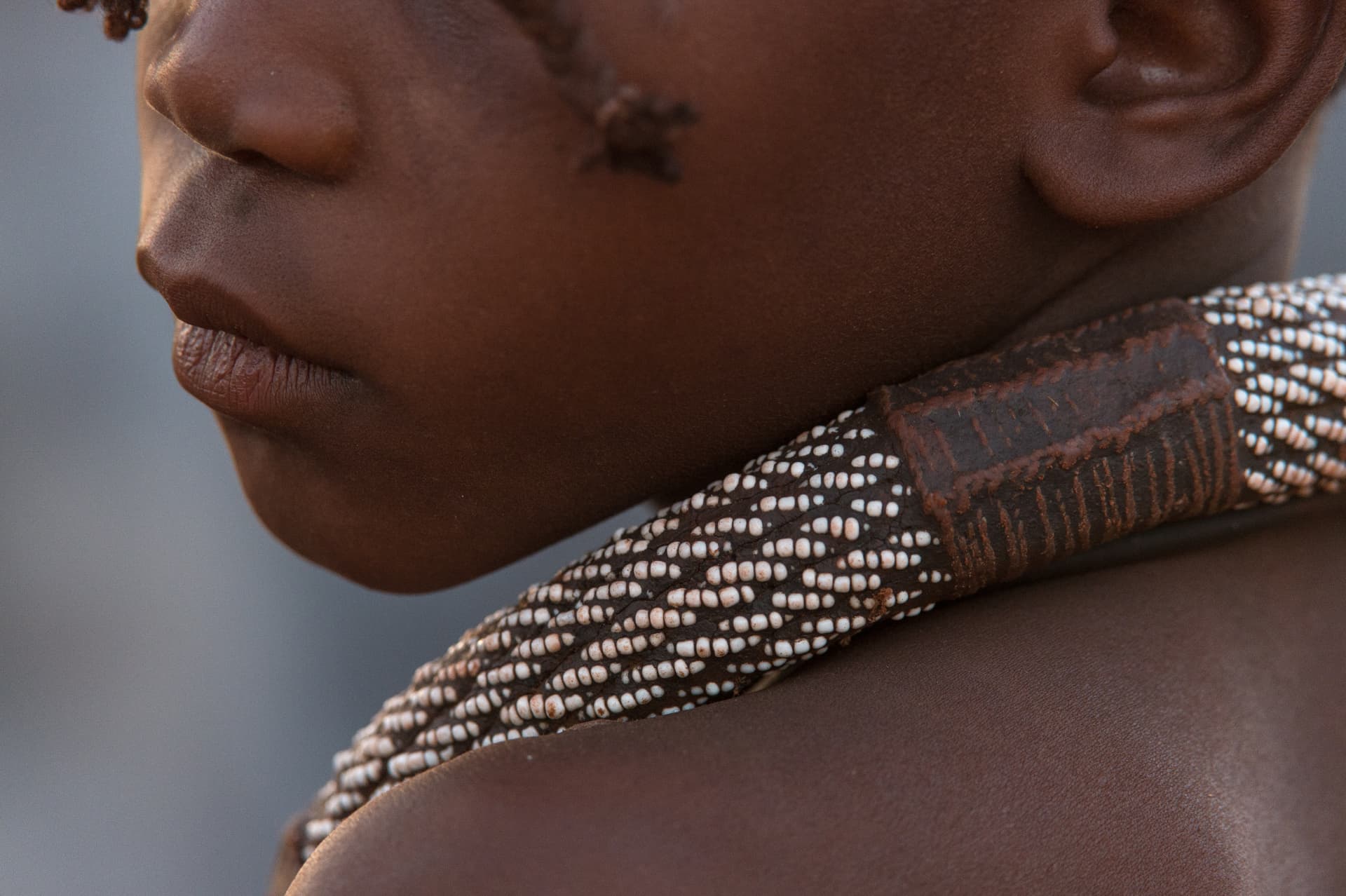 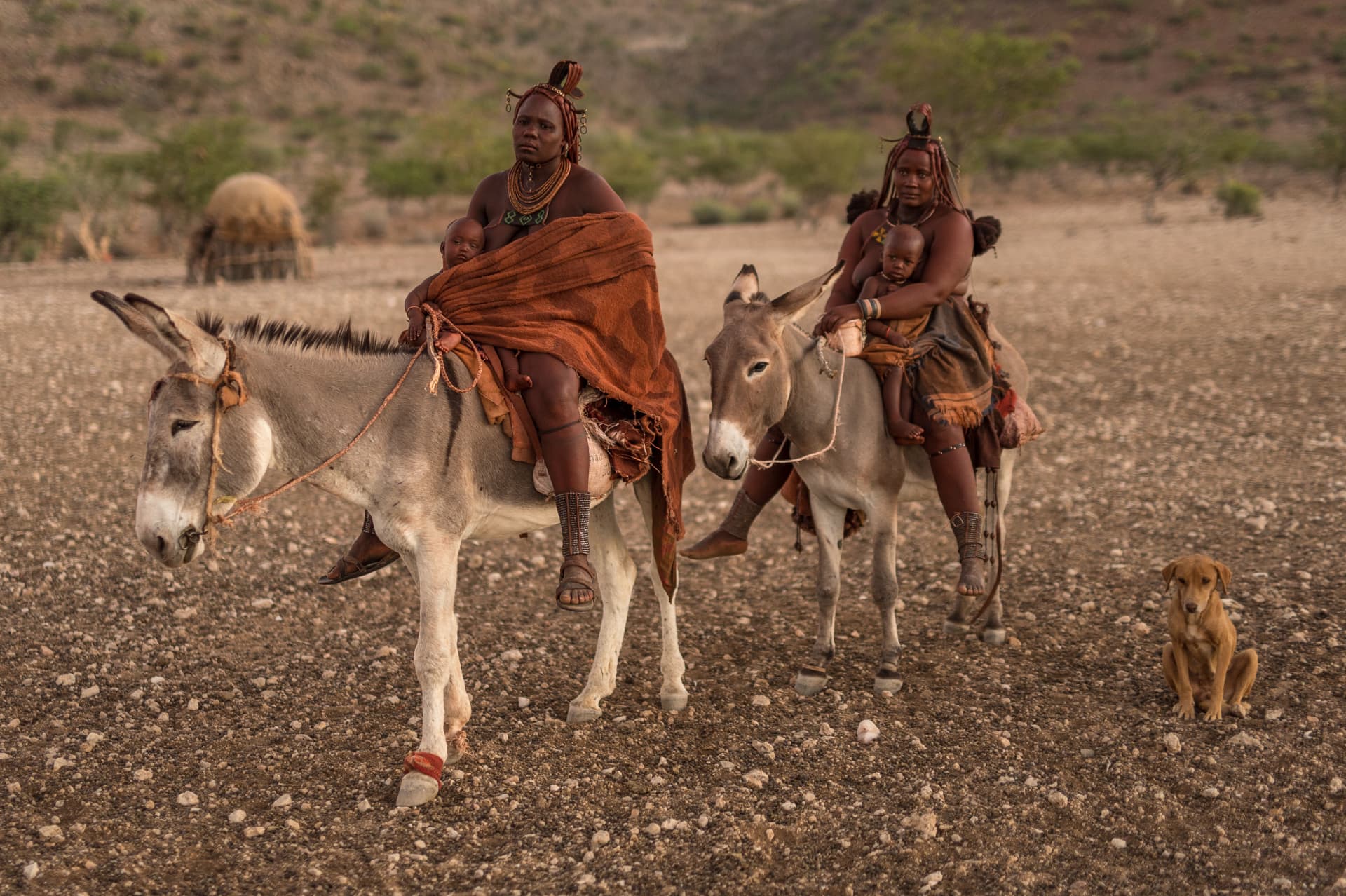 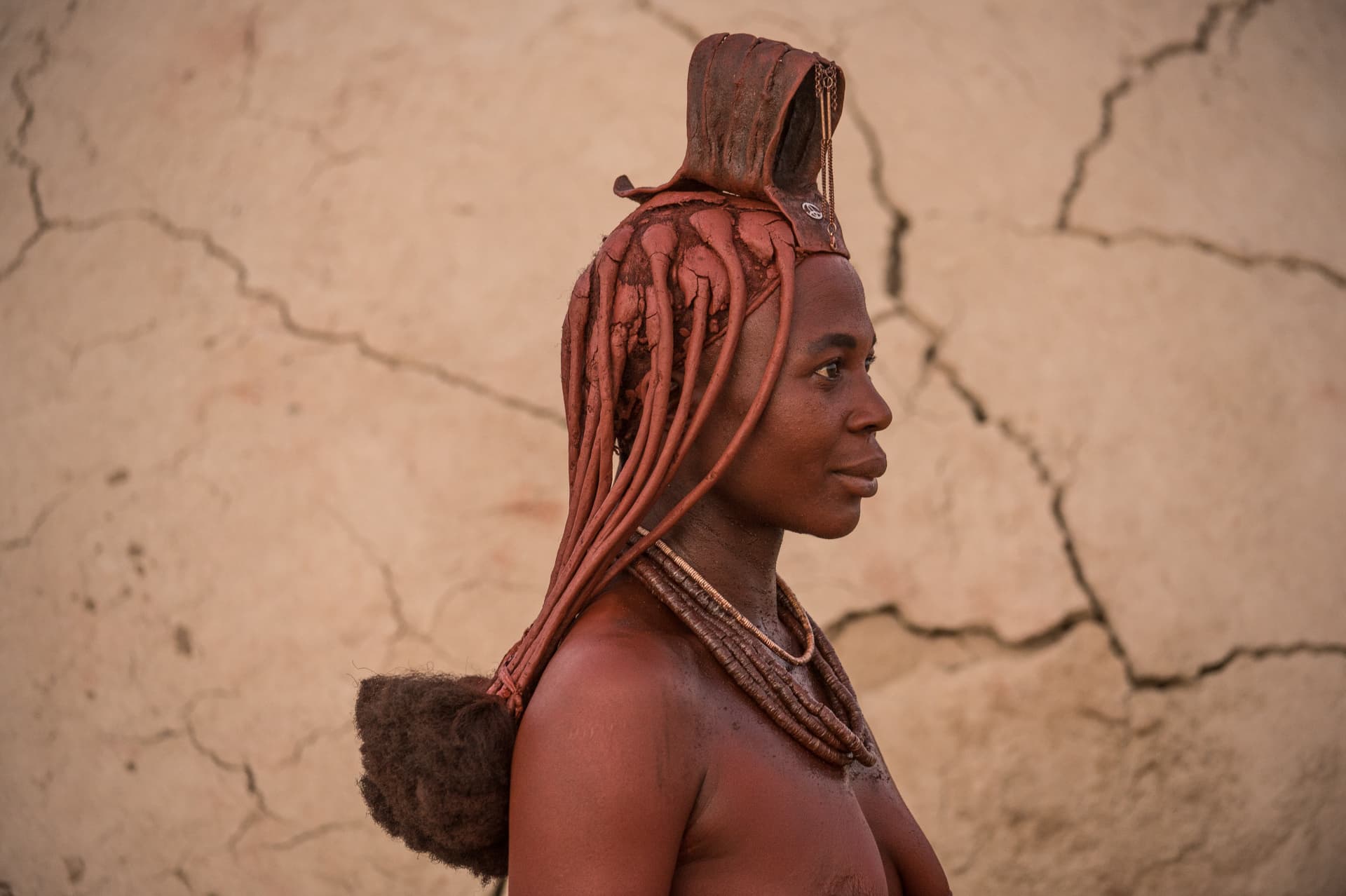 It is probably their unique headdress and the artistic staging of the body with harmoniously arranged scars and expressive painting that have made the Bodi, Mursi, Kara or Hamar so well known. Many things have a special meaning. Sometimes as a sign of social status, as belonging to an age group or as a sign of success in warlike conflicts. 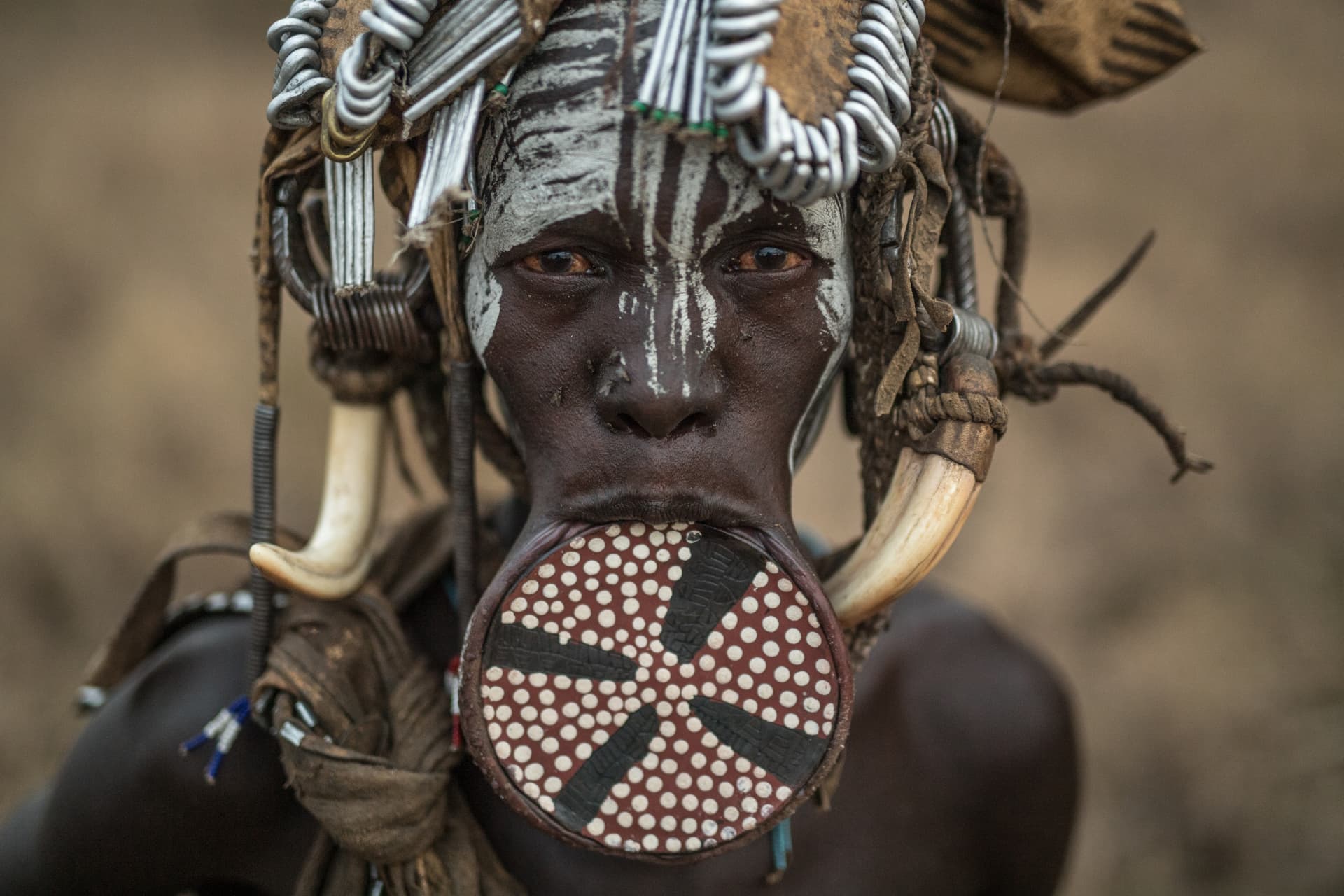 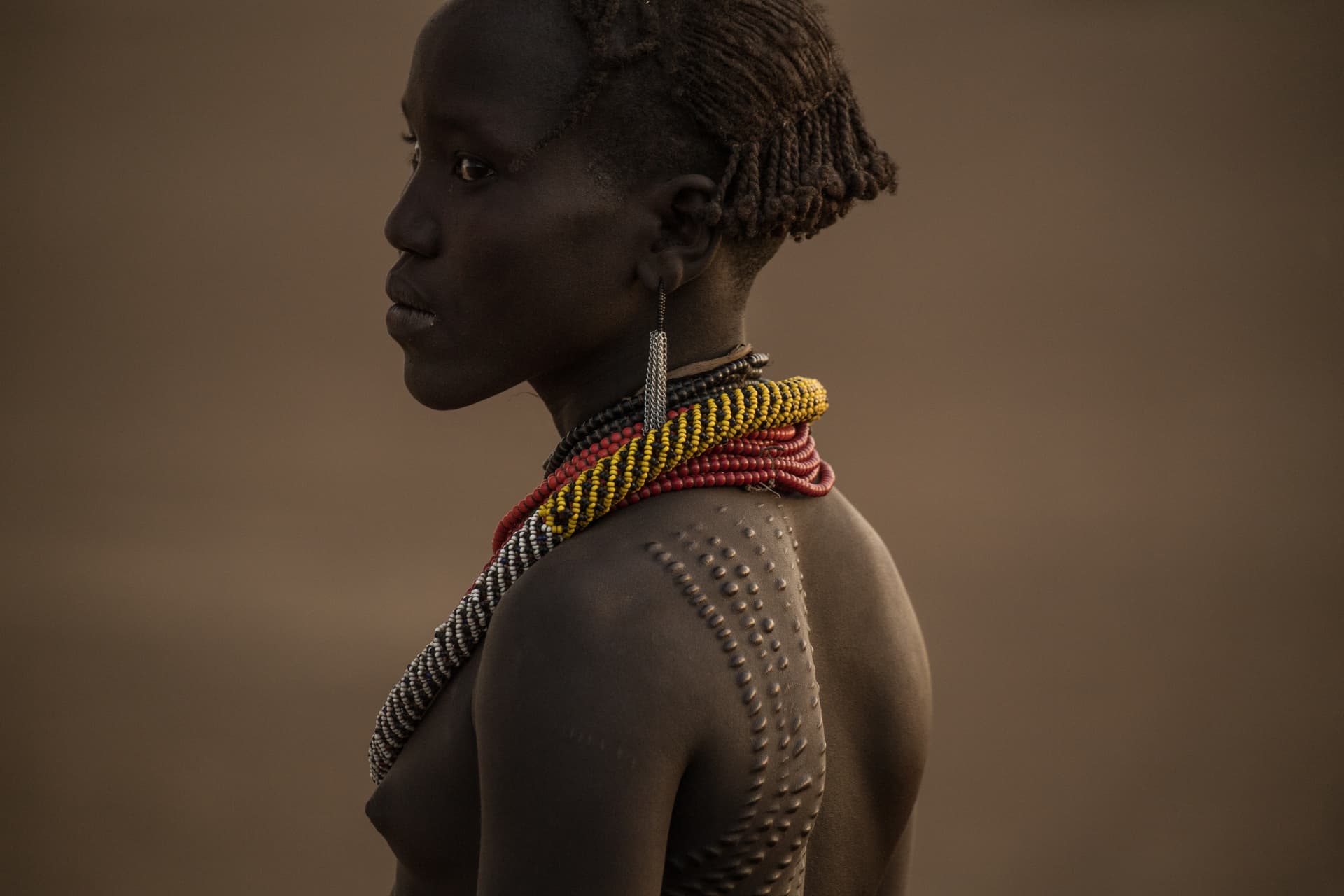 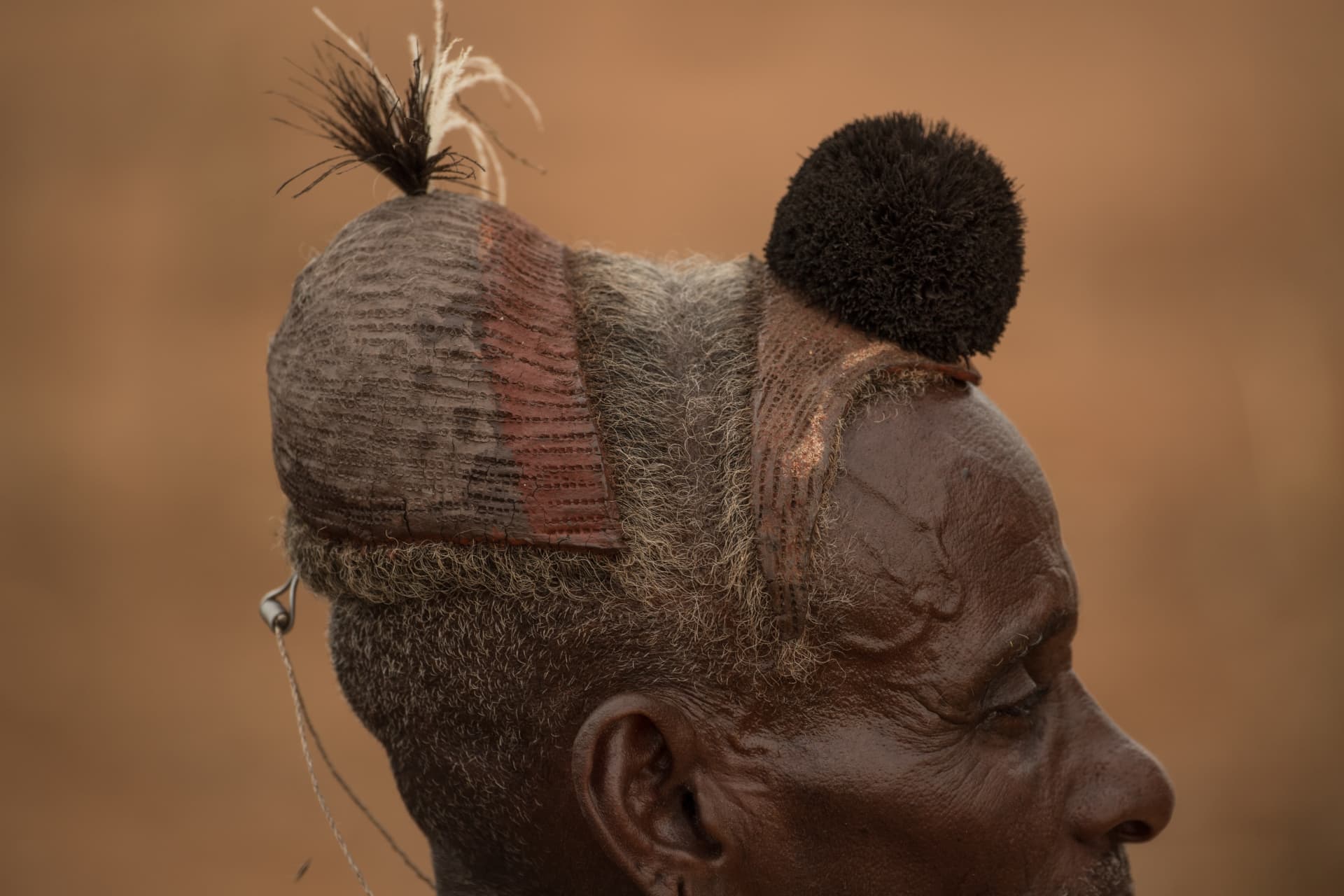 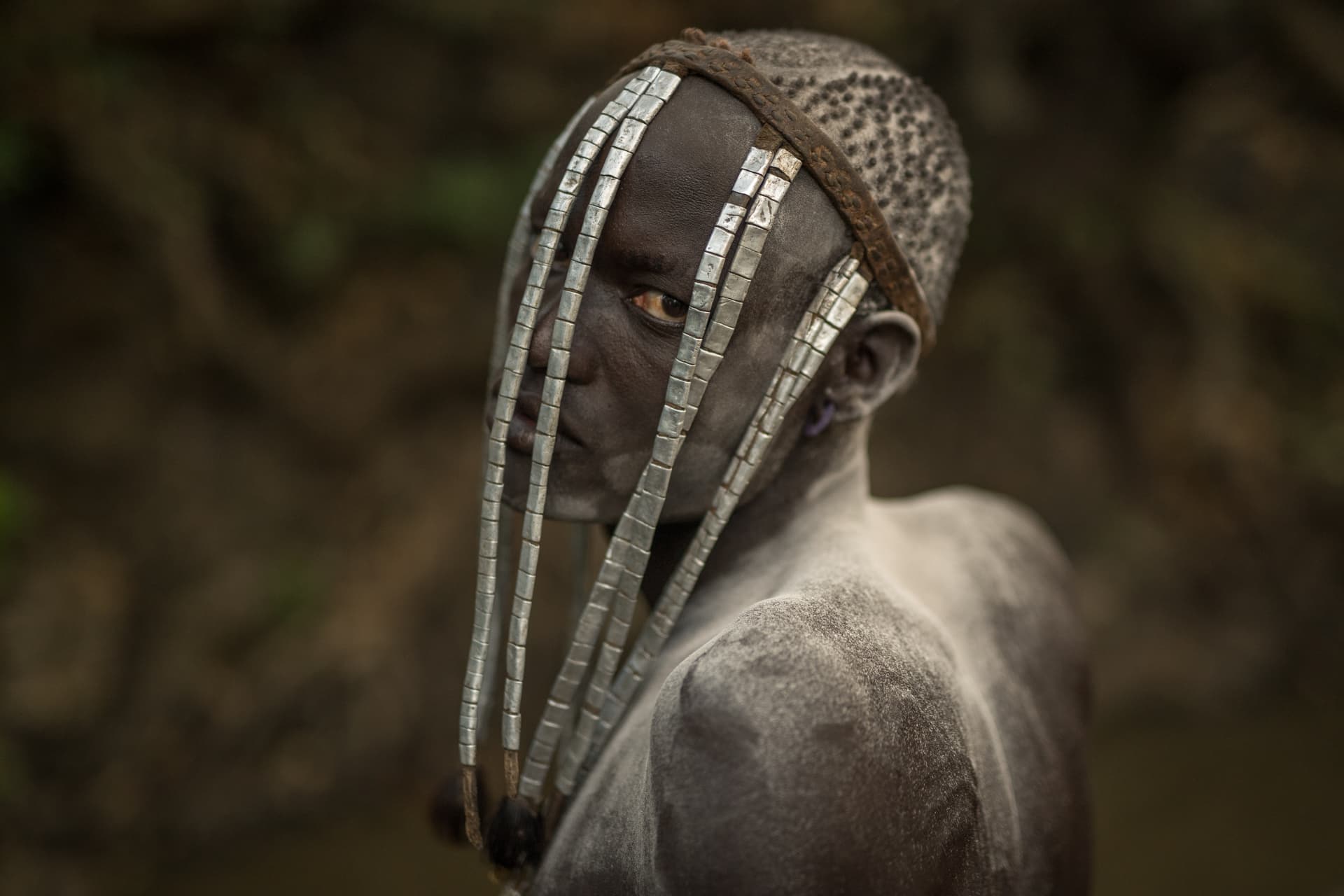 Markus Mauthe is a photographer, filmmaker, speaker, author, and environmental activist who campaigns for the preservation of our planet.
Markus grew up in a family of photographers on Lake Constance. He was born in 1969 and visited Africa for the first time when he was 17. At 20, he crossed New Zealand by mountain bike. As a trained industrial and advertising photographer, he started his own business as early as 1991. He worked for Greenpeace for 20 years and gives up to 120 lectures a year. 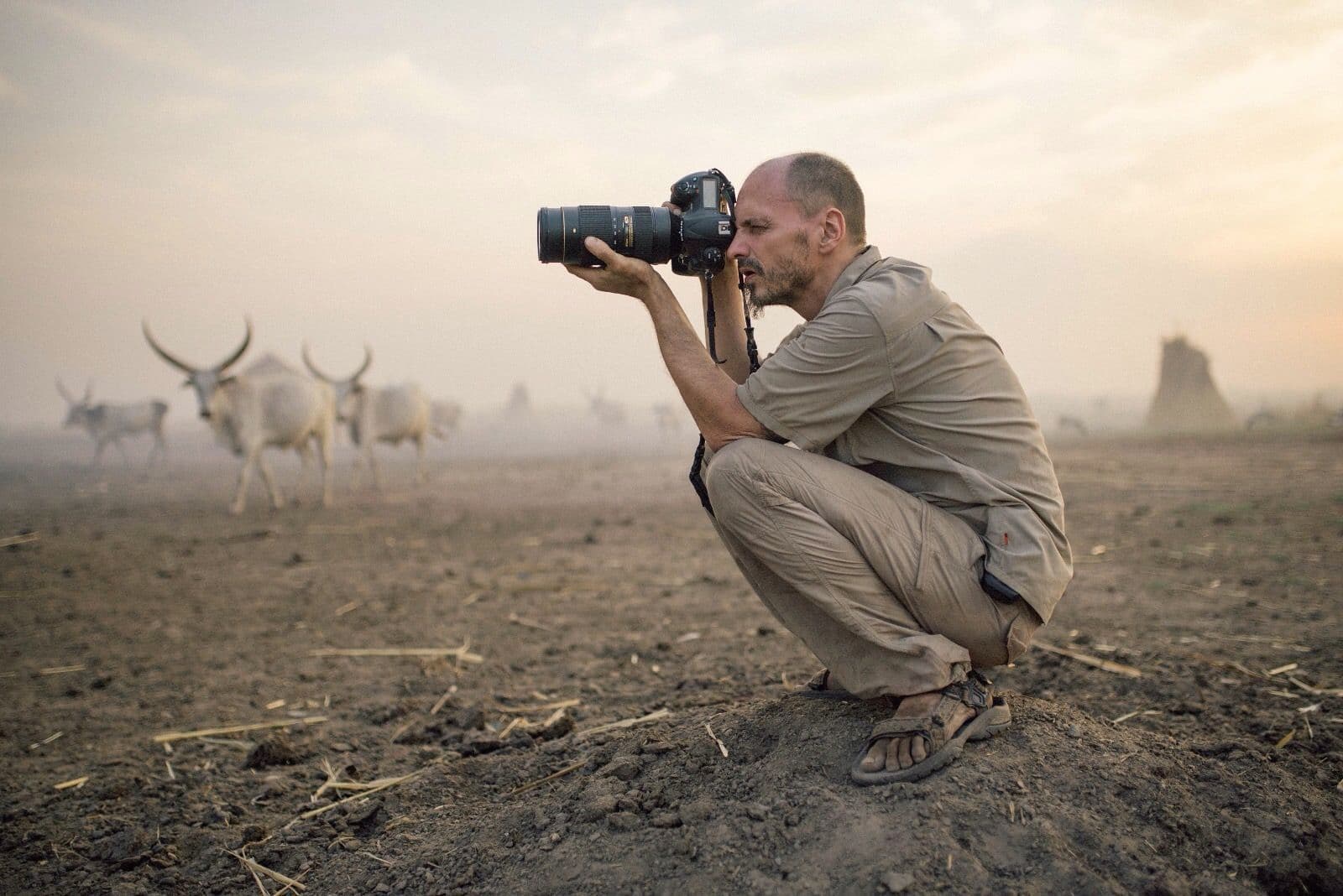 In the meantime, he has travelled to over 80 countries, some of them several times, and photographed them. For his project "At the edges of the world", he spent three years on 13 journeys to visit 22 indigenous peoples in remote regions and was accompanied by a film team for the first time. More information on the film can be found under "Further knowledge". In addition to the live shows, a premium illustrated book entitled "LOST" has also been published, only a small part of whose photographs can be seen here.

Markus is the founder of the non-profit nature conservation organisation AMAP (Almada Mata Atlântica Project), which works to preserve and expand the already highly fragmented Atlantic rainforest on the east coast of Brazil. Brazil is his second home. There he lives with his wife and two children on a 400-hectare organic cocoa farm. You can find more information about him on his website https://www.markus-mauthe.de.

Note: The texts used on this page are partly taken from the book "Lost - An den Rändernder Welt" and are subject to copyright protection. Copyright © 2018 MarkusMauthe/Florens Eckert, Knesebeck Verlag.
‍

At the edges of the world

"The film shows how civilization has made its way to the far corners of this world. It raises complex questions and doesn't pretend to know the answers itself." (Badische Zeitung).

"A calmly delivered lesson in sustainability that makes the viewer aware that with the loss of these tribes, invaluable knowledge is also lost." (Weser-Kurier)

This global assessment of biodiversity and ecosystem services was conducted by about 150 selected experts from all regions of the world, including 16 young scientists, supported by 350 authors. More than 15,000 scientific publications, as well as extensive indigenous and local knowledge, were analyzed.

By 2030, global action should be taken to conserve and protect nature and its essential services to humans.

Under the title "Art for Impact", the Intalcon Foundation makes its website available to ambitious visual artists as a platform for exhibitions. Especially in times of pandemic, too many doors remain closed to culture. Here, the Foundation wants to be supportive on the one hand, and at the same time use art as an effective means and form of expression for environmentally and socially critical messages. For this reason, the artists selected by the Intalcon Foundation always have a connection to the Sustainable Development Goals of the United Nations. They use the language of art to attract attention and to stimulate reflection. 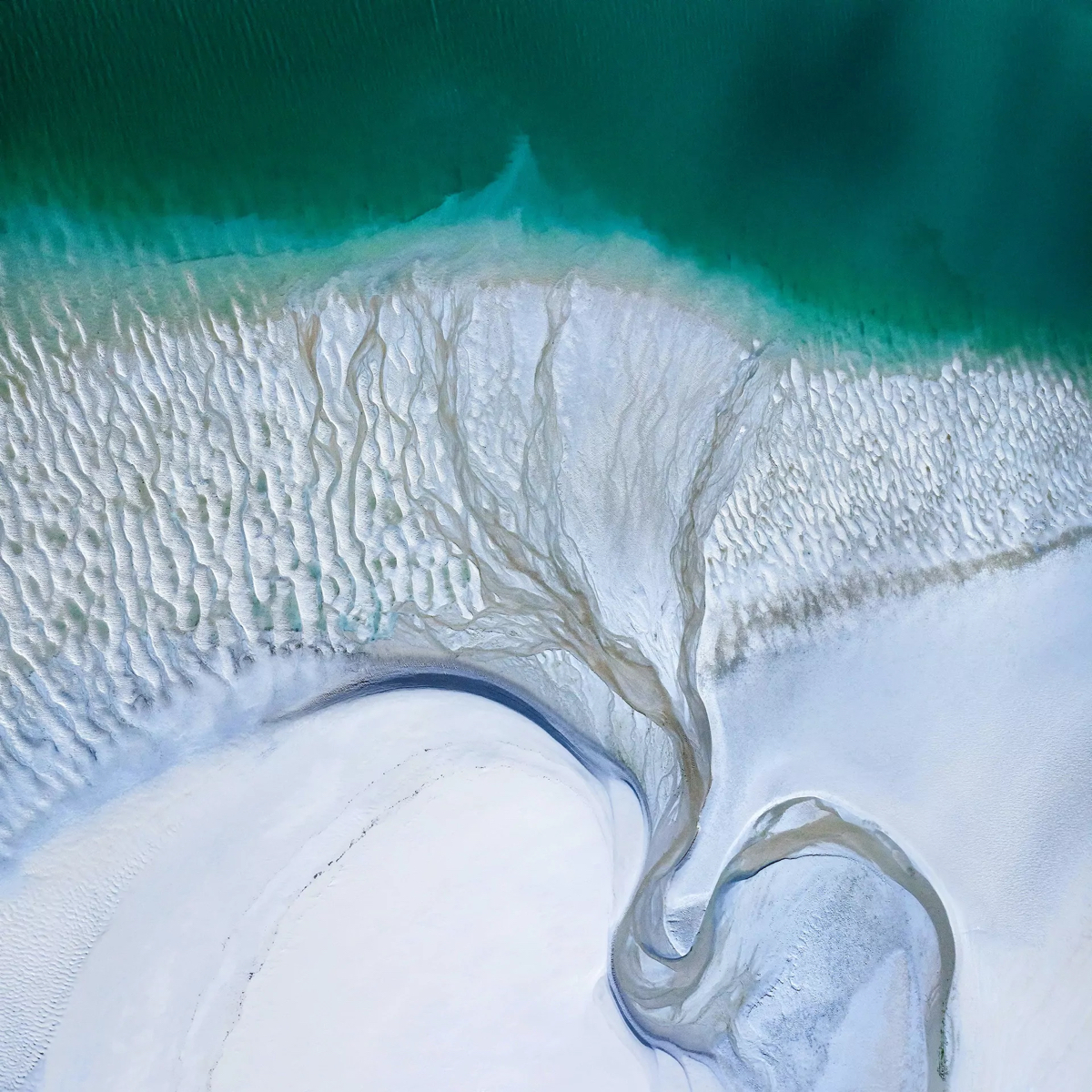 Dr. Yi Sun: The scars of the earth

The aerial photographs by the Chinese artist and scientist Dr. Yi Sun showcase the beauty of nature with a breathtaking selection of motifs. At the same time, they also symbolize the influence of man on this planet. From an unusual perspective - often from more than 1000 meters above the ground - they raise awareness for climate change and for a neglected environment marked by exploitation and destruction.