Thank you! Your submission has been received!
Oops! Something went wrong while submitting the form.
Share this Article & Support our Mission Alpha for Impact
Alpha

read more
Post by
Text Link
All around us, every day, algorithms are assuming more tasks, whether as driving assistance systems in the car, personalized search engines on the Internet or even in the medical field. Though we unknowingly use algorithms in aspects of life, the majority of people still do not trust them and rather rely on human experts to make forecasts and decisions. Why is this the case since algorithms have proven to perform better? To answer this question and draw according conclusions we as investment professionals will look to a recent University of Pennsylvania study.

Who gives the more accurate forecasts: human experts or algorithms? Although the pride within man won’t be thrilled to hear it, research findings of recent years show that even through different fields of study, algorithms outperform their human counterparts. One, much cited meta-study [1] which is based on a total of 136 studies, showed in those cases that algorithms beat the human forecast 94 percent of the time. The superiority of statistical models is consistent, according to the researchers irrespective of the area of responsibility, the nature and experience of the participants and the underlying data.

If algorithms prove to have advantages, why do we reject them?

Even more surprising is the fact that people rely more on a "man-made" prognosis than a statistical algorithm - with the corresponding consequences. This phenomenon is referred to as "algorithm aversion". What are the reasons for this behavior? Science supplies several hypotheses: Firstly, this could be related to the desire of people to receiving the most perfect predictions possible.

The assumption that algorithms would not take into account qualitative factors, is a possible explanation. Also, the assumption that human experts increase their prediction quality due to their experience over time is likely to play a role, such as the hierarchy of needs by Maslow: algorithms that perform better than humans stand in the way of the human self-esteem.

Researchers at the University of Pennsylvania [2] wanted to know more and to set their own investigations. Using a variety of data, subjects had the task to predict the chances of success of candidates and decide on their admission to the MBA program. The special feature: In different experiments – before issuing its own forecast – participants were offered the opportunity to take a look at either the statistical forecasting model of the registration office, a human expert, both or neither. This division made it possible to find out if and when the participants trusted themselves, a model or any other expert and also how the performance of the algorithm would influence the choice. A financial bonus acted as incentive: the better the predictive power of the participants (regardless of whether this comes from them or from the algorithm), the higher the potential bonus for the participants.

The results of the study are interesting in many ways and provide traders with plenty of food for thought - more on that later. The algorithm performed better than the volunteers in all experiments, confirming the results of other studies. The average error rate of the subjects was 15 to 29 percent higher compared to the algorithm. Noteworthy aspect here: Subjects showed a significant aversion to algorithmically generated predictions, whenever they could "see" the models. The negative attitude was also present when the algorithms did better than the human expert.

The researchers` hypothesis was impressively confirmed:

Just because we observe the algorithm "at work" and therefore sooner or later also notice its errors, we tend to rely on the human expertise – despite the higher accuracy of the algorithm.

The conclusion is: People turn their back on the algorithm for errors faster than on their fellow man – even if the latter makes bigger mistakes. To stay with the experiment with the admission to MBA: We rather forgive a mistake the staff in the registration office and turn a blind eye while we do not excuse wrong decisions of a statistical forecasting model. Although we know that it delivers better decisions in the long term.

This all taken into account, how is it possible the participants believed that algorithms avoided obvious errors, but in most cases still relied on the latter? The answer from the researchers: They believe that their fellow man learns from mistakes better than algorithms.

Man versus machine - who is the better trader?

Having presented the main findings of the research study, the question arises: what does the study have to do with the stock market and trading? The answer could not be more apparent, “Everything!” Finally, here every market participant is faced with the question of what approach he should rely on for his trading and investment decisions:

b) a human expert (own assessment or third party opinion from analysts, fund managers etc.)

c) a combination of algorithm and human

Quant traders rely on clear rules, statistics and back tests in order to systemize their decision process and thus eliminate human emotions, in other words facts rather than emotions. Discretionary traders on the other hand argue exactly the opposite: a purely mechanical approach can`t be successful in the long term, because it is precisely the human faculties such as intuition, flexibility and adaptability that are superior to a mechanical code in times of constantly changing markets.

Everyone who wants to be successful in the long term does well to reduce their reservations concerning algorithms. It is in every professional’s best interests to rely on a rule-based, systematic strategy than on feelings and opinions.

The reasons for this are obvious:

People can come to different decisions depending on the physiological condition or environmental influences with the same facts. Algorithms do not have this problem.

People rely on heuristics that aren`t always founded useful and empirically. Algorithms on the other hand rely exclusively on facts and evidence.

People show overconfidence, over-optimism and let their feelings get in the way. Algorithms do not know these states, they have no emotions and have no ego.

We can conclude that human strengths in the development of algorithmic trading strategies are a very good thing but after that the decision-making process should be left to the algorithms. 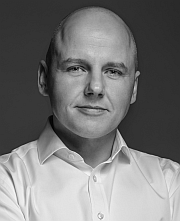 David Pieper graduated in 2002 with a degree in business administration (specializing in banking) and began his professional career as an investment advisor. After further training to become a Certified International Investment Analyst (CIIA), he gained several years of experience in investment research at LBBW in Stuttgart. His activities focused on technical, fundamental and sentiment analysis of the US equity market. Mr. Pieper has been involved in various aspects of technical analysis and behavioral finance since the late 90s. At Intalcon he is a Systematic Strategies Specialist, responsible for the development and evaluation of rule-based investment strategies.
The guest author's contribution does not necessarily reflect the opinion of the editorial team.