read more
Post by
Text Link
There is a time to make money and a time to lose as little as possible. Charles Gave suggests that we have entered the latter phase. He backs this up with the 30-year energy cycle, which is the main driver of the global financial cycle. In this paper, you will learn what history suggests about the coming years.

A key part of my recent research has been the link between energy prices, the economy and stock markets. Today, I will try to establish the existence of a roughly 30-year energy cycle, which my hypothesis says is the key driver of the global financial cycle.

To begin, let’s do a brief recap of the findings in my last report. The red line in the chart below is the ratio between the S&P 500 price index and the WTI price for oil, detrended by the post-1900 1.3% growth rate. The detrended ratio is mean reverting: there are times when the market is expensive versus oil and times when it is cheap, but it always heads back to the mean.

Below are my key conclusions so far, which I reiterate to show the relationship between energy prices and the creation of value in the economic system:

Having completed this work, I was pleased with myself (always a bad sign) and began to muse on possible new research topics. But at this point, I realized the key insight of my work on the energy/equity link: there is likely a 30-year cycle linking US stock market returns and energy prices.

My understanding of the capitalistic cycle therefore runs as follows:

In order to “prove” this 30-year cycle theory, consider the chart below.

In red is the now-familiar market-to-oil ratio. In blue is the same ratio, pushed forward by 15 years and inverted. What it shows is simple: the previous cycle is a good forecast of the next cycle. If true, the forecast is grim: the next 10-15 years look as if they will be very hard for most markets. The exception is those, like China and Russia, that kept investing in energy production.

The scale of the coming stock market falls can be guesstimated with the chart overleaf: it replaces the S&P 500-to-oil ratio with the Shiller P/E ratio.

At the bottom of the last Ursus magnus—which took place when oil peaked versus the S&P—the Shiller P/E remained below 10. This is not encouraging: as energy prices rise, it will become hard for earnings to grow structurally.

We have seven lean years in front of us and I am already seeing many miserable looking cows, some of which were unusually fat only a year ago. I conclude that investors should avoid illiquid assets, as there is a time to make money and a time to lose as little as possible. I suspect we have entered the latter period, so it is time to fire the offensive team and bring in the defensive one.

I suspect this energy crisis will badly dent economic growth, and so corporate earnings. Higher energy prices are a tax on the consumer, and I am almost certain that the political choice made in favor of renewable energy sources will lead to massive blackouts. Watch California.

But the apex of the crisis will be the eurozone. Demand should collapse due to tax hikes and the shuttering of the nuclear industries in Germany and Belgium. But even in this grim situation, the existing energy stock will likely fail to satisfy demand and power outages will occur.

To badly paraphrase Winston Churchill: “Never in the field of energy policy has so much been wasted by so few [ecologists]”. Compared to the next few years, the 1973-74 equity crash could look tame. I say that as someone who experienced the early ‘70s bust, and never fully recovered psychologically. 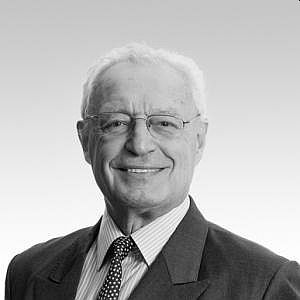 Charles Gave is the founder of Gavekal one of the world's leading research companies and think tanks headquartered in Hong Kong. Charles has decades of experience in the financial market as a founder of asset management companies as well as in leadership positions at various institutions such as Banque de Suez, Cursitor-Eaton Asset Management and Alliance Capital. He is also the author of several best-selling books. Charles has been married since 1966 and has 4 children and 11 grandchildren. A complete overview of his vita and numerous achievements would go beyond the space here. Therefore, please refer to the website of his company: https://research.gavekal.com/author/charles-gave.
The guest author's contribution does not necessarily reflect the opinion of the editorial team.