read more
Post by
Text Link
At a time when the world is consuming its natural resources at an unsustainable pace, businesses should do more than reduce their carbon footprint. It's vital they cut their water use, too.

The world is waking up to the need to protect the environment for future generations. Cutting carbon emissions is a step in the right direction – one for which businesses are increasingly being held to account, whether that's by regulators, consumers or shareholders. But it is not the only step the corporate world needs to take. Restricting water use is another battleground in the fight for sustainability.

Measuring and comparing water usage across industries is the immediate priority. One starting point is the Planetary Boundaries framework, a model that establishes numerical limits for the nine most damaging environmental phenomena facing the planet, from climate change and freshwater use to biodiversity loss and land use. The framework, developed by the Stockholm Resilience Center, suggests we can sustainably consume up to 4,000 billion cubic metres of freshwater per year – broadly in line with current usage levels, according to some estimates. But by 2030, world water demand is forecast to reach 6,900 billion cubic metres, far exceeding accessible and reliable supplies. [1] Around a fifth of all the water used is consumed by industry. Which means businesses have a major role to play in re-imagining how we use and recycle this precious resource. For the world to stay within sustainable boundaries, research shows that businesses should use no more than 52,915 cubic metres of water for every million dollars of revenue they generate. [2] Companies that restrict their use in this way are rewarded through cost savings and the reduced risk of exposure to water shocks. They are also more likely to win favour among increasingly environmentally conscious consumers and regulators.

As with the fight to cut carbon emissions, investors have a key role to play, both by encouraging companies they invest in to embrace water efficiency, and by actively seeking out businesses which have shown particular innovation and progress in this regard. Ceres, a research and advocacy group focused on sustainability issues, has launched a toolkit to help investors understand water risks and incorporate them in the portfolio allocation process, identifying sectors by high, medium or low exposure to water-related threats. The Boston-based group also suggests that investors make a concerted effort to influence companies’ water risk through shareholder engagement. The United Nations, meanwhile, has created the CEO Water Mandate and, through its Sustainable Development Goals (SDG), is pushing for universal access to safe water and sanitation- an initiative that has secured the backing of large, thirsty companies such as Coca Cola, Nestlé, Unilever and Siemens. The UN focuses on a metric it calls water use efficiency (WUE). This effectively captures the gross value-added economic activity per unit of water consumed by a country, industry or company. Before WUE scores can be used to inform investment decisions, however, it is essential that they are both comparable and give a true reflection of each company’s exposure. For now, this is probably not the case. WUEs range widely even for companies in the same sub-sector, let alone industry.

Take brewing, a big water user. Overall, the industry produces some 1.9 billion hectolitres of beer a year, [3] and – from crop cultivation to consumption – uses at least 60 times as much water in the process. [4] Yet within the industry there are huge variations in water consumption from one brewer to another. One international brewer, for example, has reported a WUE score of USD1,850 of gross value-added economic activity per cubic metre of water consumed, while its rival only manages USD270. The issue is that while the better-scoring brewer is clearly further advanced on the water efficiency path, it is at present hard to do a fair comparison as the calculations can vary widely.

For the data to be meaningful, companies must consider their water use across the whole production chain – something which many currently do not do. A typical clothing retailer, for example, will use relatively little water. That ignores the fact that the cotton, from which the garments are made, is very water intensive to produce. Looking at the operation in isolation of its supply chain and products usage downplays the role the company can have in global water efficiency (in this case by raising the issue with their suppliers). It also downplays the extent to which it could be negatively affected in case of a water shock.

What makes the issue even more complicated is the fact that water is a local problem – large reserves in one country cannot effectively be transferred to deal with a drought in another. The location of a company, therefore, can strongly affect the likelihood of it being subjected to water risk and the degree to which it sees water efficiency as a priority. Investors can help establish standards and promote accountability. It is in our interests to do so – businesses which do not embrace water efficiency face increased risks not just from water shortages, but also from changes in regulation and from increasing environmental consciousness among consumers. Much as the carbon footprint is today becoming a consideration in the construction of portfolio construction, water use can in future be an important input.

Being water efficient means not only means using less, but also reusing more. Some of the world’s leading industries are already adopting a circular economy approach, treating wastewater as a resource rather than as something to be disposed of. As our society – from politicians to consumers – becomes more aware of environmental challenges, companies that are in a position to demonstrate a circular approach to water use will benefit from improved perception and reduced reputational risk.

Good environmental management is a useful metaphor for a soundly run business. That is true for carbon emissions, and it is also true for water efficiency.

Some industries clearly use more water than others, and thus have more scope to push through change and to benefit. Companies involved in food production are obvious candidates. In some regions, too, there is greater impetus for change than in others due to local water conditions. However, the problem is a broad one – everyone uses water and, in an increasingly interdependent and interconnected world, virtually all major businesses are exposed to water scarcity risk at some point in their operations. Investors with deep insight into water use and efficiency thus have the potential to identify hidden risks and opportunities.

Good environmental management is a useful metaphor for a soundly run business. That is true for carbon emissions, and it is also true for water efficiency. 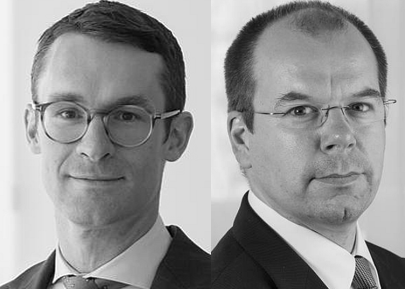 Marc-Olivier Buffle joined Pictet Asset Management in 2014 as a Senior Product Specialist in the Thematic Equities team. Before joining Pictet, Marc spent 6 years at RobecoSAM where he acted successively as senior analyst, head of industrials and head of SI research. Prior to that he was responsible for business development at the Danaher Corporation. Marc started his career at Trojan Technologies in London Canada, where he LED a R&D team focusing on water treatment technologies. Marc holds a MSc in engineering from the ETH in Zurich, and a PhD from EAWAG in Environmental. Cédric Lecamp joined Pictet Asset Management in 2007 and is a Junior Investment Manager for the 'Water' and 'Agriculture' funds in the Sector & Theme Funds team. Cédric graduated with a degree of Bachelor of Law from the University of Durham and holds an MSci in Business and Administration from HEC Geneva.
The guest author's contribution does not necessarily reflect the opinion of the editorial team.

Impact investing is not just an investment strategy, it also means securing the future.

What is Impact Investing? Is it possible to do good and do well at the same time?